Tisha Knott knew she wanted to study Medical Assisting since she lost her mother to lung cancer–because of the excellent care she received.

“I saw how much everyone involved with her care and treatment made a difference in how she handled the disease,” says Knott, a Medical Assisting student at Ivy Tech. “The knowledge they had was great, yes, but some of the kindest and caring people made my mom’s bad days better. I want to do that for people and give that back.”

From early in her education, Knott saw that the field was a good fit for her: She remembers watching a demonstration in Anatomy and Physiology–a sheep eyeball dissection–when a fellow classmate passed out. Knott remembers that she was the only person in class to react and catch his fall. He assured the classmate was OK and went to get help.

“He was fine, but when I reflect on that moment and how I reacted without any proper training–it was my instinct to help him–I knew that healthcare and direct patient care were for me,” she says.

click on photos to zoom and for caption info 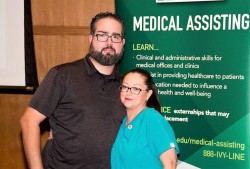 Tisha Knott and her husband, Daniel, at her Medical Assisting pinning ceremony after she was accepted into the program in September 2017 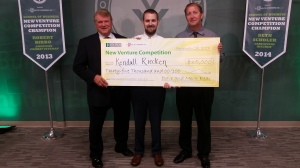 Kendall Riecken is one of those who’s making his way: He won Ivy Tech’s New Venture Competition last year with KR Designs, his automotive company.

“My education prepared me to understand how the real world of business actually works,” says Riecken, a, Ivy Tech business administration graduate. “There were so many theories taught in school, and now I actually get to put them to use and understand what it takes to be successful in business.”