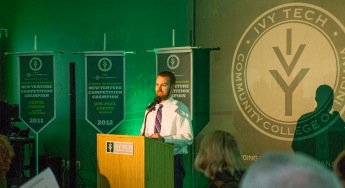 Riecken graduated from Northrop High School in 2012 and started KR Designs shortly after. Currently, he operates out of his parents’garage, and part of the $35,000 in startup capital he receives from the New Venture Competition will go to build his new space, which he plans to locate between Fort Wayne and Auburn.

“The money I won tonight will go for a paint booth, air compressor, specialty tooling, and paint equipment,” he says. “Anything left over will go toward construction costs.”

Riecken and two other New Venture Competition finalists presented their business plans to about 30 community judges. After the 15-minute presentation, judges were given 15 minutes for a question-and-answer section. They had been previously provided the finalists’ business plans for review.

Learn more about Riecken and KR Designs in this brief video.

Riecken is the seventh winner of the New Venture Competition, whose presenting sponsor was Dave and Mary Bear of JB Tool, Die & Engineering Inc. The competition is also made possible through a grant from the Edward M. and Mary McCrea Wilson Foundation. The awards dinner sponsor was ProFed Federal Credit Union, and the competition was in collaboration with Fort Wayne SCORE.