Ivy Tech Community College is pleased to announce the Spring 2018 Dean’s List for the Fort Wayne Campus and the Warsaw Site. The Dean’s List, prepared and published each term, gives recognition to students who:

END_OF_DOCUMENT_TOKEN_TO_BE_REPLACED

Julie Perez, a Human Services student at Ivy Tech Community College’s Fort Wayne Campus, has been nominated as the Indiana finalist for the 2018 Educational Opportunity Association’s Phyllis Gray Memorial Scholarship. Perez, who is a member of Ivy Tech Fort Wayne’s TRIO Leadership Council, and nine other students from across the association’s 10-state region are semi-finalists for the scholarship.

“She is such a positive influence,” says TRIO director Beth Clemons of Perez, who is a mother of five. “She’s a perfect example that, no matter a student’s situation, they can accomplish their dreams.”

Perez and the other semi-finalists were nominated by their respective TRIO Student Support Service chapters. TRIO is a U.S. Department of Education-funded program that provides services for students who are first-generation, are low-income, or have a disability.

Additionally, Perez is the winner of two scholarships from Indiana TRIO, the statewide association.

Each April, the library at Ivy Tech Community College’s Fort Wayne Campus hosts Ink Cloud, a poetry competition. Students are invited to submit their original poems for judging by an employee panel.

“The judging process is always interesting because each judge brings their own likes and dislikes to the table,” says David Winn, a library clerk who organizes Ink Cloud. “Creativity is always the biggest thing that stands out, whether it’s in the concept of the poem or how words are used to say something in a unique way.”

In Navarrete’s poem, she used concrete images of day-to-day life growing up to elevate the piece to something more than a poem about the hurricane, he says. Valenzuela pulled the imagery together to produce a tone between melancholy and nostalgia.

“There was a lot the we could read into it as judges with our own personal experiences, and that makes a poem powerful,” Winn says.

Here are the winning poems:

END_OF_DOCUMENT_TOKEN_TO_BE_REPLACED

Ten students from Warsaw’s Orthopedic and Advanced Manufacturing Training Center graduated Friday from Ivy Tech Community College’s Warsaw Site. Seven of those students earned a certificate in Machine Tool Technology, and three, who earned their certificate last year, earned their technical certificate this year, which means those students have the first year of their two-year associate degree finished. 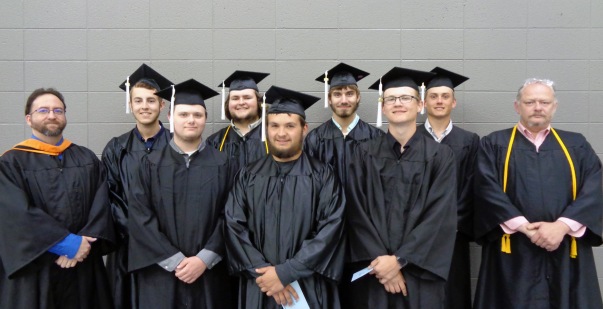 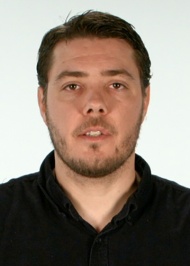 STUDENT SPEAKER: The class of 2018’s student speaker was Brandon Krontz, who graduated with an associate degree in criminal justice. When he first began attending Ivy Tech, he lived in a homeless shelter for veterans. Today, he is married, and his blended family has seven children. Krontz is a Dean’s List student and wrote in his speaker application, “I have been clean and sober since Sept. 18, 2014.”

BUD CURTIS AWARD FOR OUTSTANDING STUDENT: The College gives two Curtis Awards each year: one recognizing an outstanding graduate from the College’s career and technical schools, and the other, the university/transfer schools. This year’s winners are Adama Samba, from the School of Advanced Manufacturing, Engineering, & Applied Science; and Cynthia Korbeck-Black, from the School of Health Sciences.

PRESIDENT’S AWARD FOR EXCELLENCE IN INSTRUCTION: Each Ivy Tech across the state nominates the winner of its President’s Award, which goes to a full-time faculty member, for the Founder’s Award for Excellence in Instruction. Ivy Tech Fort Wayne’s nominee is Tony Ramey, assistant professor of Business Administration. 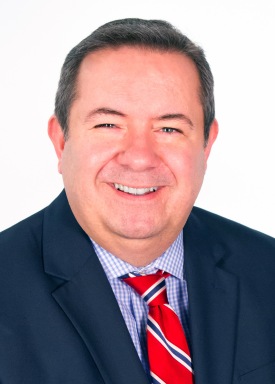 ADJUNCT FACULTY AWARD FOR EXCELLENCE IN INSTRUCTION: Each Ivy Tech across the state nominates the winner of its Adjunct Faculty Award, which goes to a part-time faculty member, for the Gerald I. Lamkin Award for adjunct faculty members. Ivy Tech Fort Wayne’s nominee is math instructor Margaret Hall.

SPECIAL NOTE: Students and guests used #IvyTechGrad to discuss the ceremony and festivities on social media. Use the hashtag to view graduation photos and messages of encouragement on Twitter, Instagram, and Facebook. 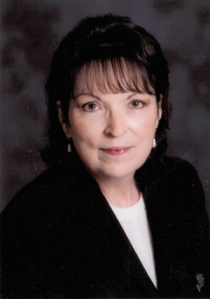 Nadeena Frye, the dean of Nursing at Ivy Tech Community College’s Fort Wayne Campus, has been selected for the National League for Nursing’s year-long LEAD program, a part of the league’s Leadership Institute. LEAD is for nursing educators who’ve transitioned quickly into leadership positions or look to advance in management or administration.

The league selected 56 educators in nursing from around the world as part of the program. Qualifications included experience, position, and a submitted essay.

“My goal is to further develop my leadership skills in order to successfully lead our nursing program into the next decade,” Frye says.

Andrew Bell, the Engineering department chair at Ivy Tech Community College’s Fort Wayne Campus, will be published in a book celebrating the 25th anniversary of the Advanced Technological Education Program, which provides education in high-technology fields and is funded by the National Science Foundation. Bell’s was one of 24 projects selected for inclusion in the book, which highlights projects from around the country.

In 2014, Bell received a grant to develop curriculum for a microelectromechanical certificate and a LabVIEW certificate. Last summer, the Fort Wayne Campus offered three microelectromechanical classes, which included LabVIEW curriculum as well. Microelectromechanical systems deal with electromechanical sensors, such as those used to detect when a tablet or cell phone is turned horizontal to vertical—or vice versa—and the tire pressure in vehicles. The LabVIEW (laboratory virtual instrument engineering workbench) curriculum focuses on visual programming language software designed for engineers and scientists. Visual programing language is any language that lets users create programs by manipulating elements graphically instead of textually. LabVIEW is specifically developed by National Instruments, a Texas-based company that produces automated text equipment and virtual instrumentation software.

Six students took the microelectromechanical classes in summer 2017, Bell says, and the classes helped and will help those students earn their technical certificate in Electronics and Computer Technology. Plus, students who pass the National Instruments certification test can include the Level 1 certification on their resume.

“This will help our students get a job,” Bell says.

Ivy Tech Community College’s Fort Wayne Campus hosted its 22nd annual European Competition on Friday. Eleven hospitality administration students in culinary arts or baking and pastry arts spent the day competing for a chance to win a scholarship that would fund a trip to study the culinary arts in France this spring.

For the first time, students were asked to turn in a menu before competing. In previous years, students’ ingredients were unknown, requiring them to create menus on-the-spot. This year, students’ adherence to the menu played a part in their scoring. It also resulted in more creative menus, says Cheryl Hitzemann, one of the baking competition judges. Hitzemann will also serve as chaperone when the students travel to France.

Watch this video for a behind-the-scenes sneak peek into the spring 2018 European Competition.

Kitchen judges watched and rated students as they worked, paying attention to technique and ability. Floor judges tasted the completed meals, not knowing which student made which plate.

Based on students’ experience in France, they will create the menu for this year’s A Reason to Taste, the College’s largest annual fundraiser.

The three students who did not earn the chance to study in France will still receive a travel opportunity: a road trip to Vermont for a farm-to-fork tour in May. On the trip, students will have experiences including a tour of the Baird Farm, an organic maple syrup farm; a chance to watch cheese-making; learning how to milk a cow; and a visit to King Arthur Flour headquarters. Those students are La’Ron Gillard, Patricia Jones, and Sheila Mertens.

Ivy Tech Community College is pleased to announce the fall 2017 Dean’s List for the Fort Wayne Campus and the Warsaw and Wabash sites. The Dean’s List, prepared and published each term, gives recognition to students who:

Below, find a full list of students who have met those requirements. Students are listed alphabetically by campus/site, state, city, and last name.

END_OF_DOCUMENT_TOKEN_TO_BE_REPLACED

The night belonged to German composer Ludwig van Beethoven, as well as his many admirers.

Donations to the Ivy Tech Foundation came through corporate sponsorships, silent and live auctions, and individual donations and benefited student scholarships, academic programs, and the Ivy Tech Titans Baseball Program. (The Ivy Tech Titans is a self-supported intercollegiate athletics baseball team that will begin formal play in the spring).

“I asked one of the donors after, did she have fun,” says Margaret Sturm, executive director of Resource Development. “She was at a table where she didn’t know anyone. She said, ‘You don’t need to know anyone because we’re all here for the same reason. It’s for the students, so everybody has something in common.’” 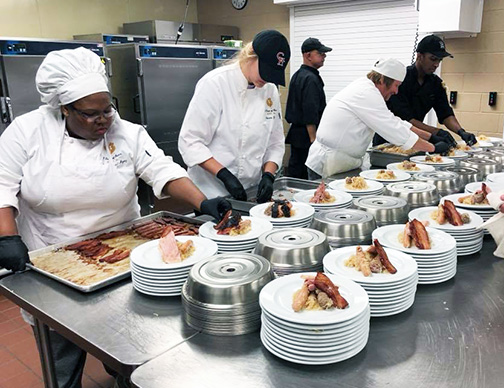 Students who won the European Competition at Ivy Tech’s Fort Wayne Campus in January created the menu and prepared the dinner for A Reason to Taste guests on Oct. 28.

At A Reason to Taste: Moonlight Sonata, guests were entertained by Beethoven’s compositions, and they enjoyed a multi-course menu prepared by students in Hospitality Administration who won an opportunity to study culinary arts in France and Germany this spring. Those students were winners of the College’s European Competition, hosted in January. They created the fundraiser’s menu based on their trip, and they cooked the dinner at the fundraiser.

Linda Jackson of Fort Wayne’s NBC emceed the event, which was hosted at Parkview Health’s Mirro Center for Research and Innovation. Donna Packnett, a community volunteer who has worked with A Reason to Taste since its inception, won the evening’s Ivy Award, which is presented to someone who exhibits outstanding community service and leadership in northeast Indiana.

Next year’s event is tentatively scheduled for mid-October. Those who are interested in sponsorship opportunities and/or serving on next year’s planning committee can contact Sturm at msturm7@ivytech.edu or 260-480-2010. Donations to this year’s total can still be made at IvyTech.edu/reason. 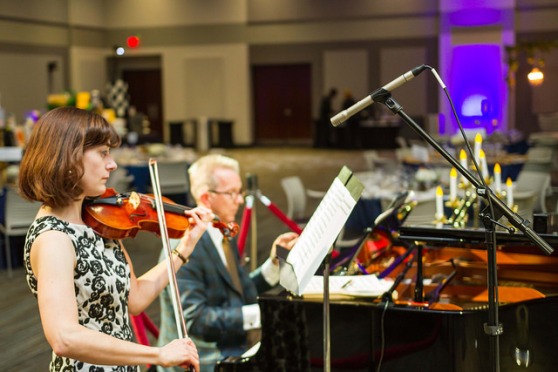 Approximately 220 guests were entertained by Emily Thompson and Robert Nance, who played a variety of Beethoven’s late 18th- and early 19th-century compositions.

VIDEOS
Check out two videos broadcast at the event and featured on the College’s YouTube channel: