The Advanced Automation and Robotics Technology program at Ivy Tech Community College Northeast has received the Indiana Career and Technical Education Program’s Award for Excellence, sponsored by the Indiana Department of Education. The program and its chair, Robert Parker, will be recognized at a public ceremony at 1 p.m. Feb. 26 at the Indiana Government Center South Auditorium (302 W. Washington St, Indianapolis).

Advanced Automation and Robotics Technology was created in 2014 to replace the College’s Advanced Manufacturing program. It is a 75-hour, six-semester associate degree (most associate degrees are four semesters). The curriculum addresses a variety of areas, including 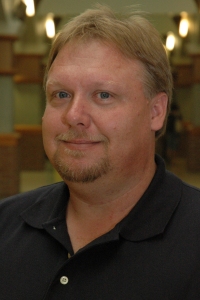 The program is designed to pair students with industry internships where they can perfect the skills they learn in the classroom and gain on-the-job experience. The program has implemented several nationally recognized certifications to close the skills gap in northeast Indiana. (Learn more about the program at IvyTech.edu/advanced-automation-robotics.)

“I really didn’t think our program was ready for winning because it’s so new, but it’s hit the ground, and it’s really taken off,” Parker says. “The students are doing well and earning a competitive wage, and the employers are appreciating the work that they’re doing and the education they’re obtaining at the same time.”

The 64-page submission packet included letters from Parker, the program’s advisory committee chair, an area employer who has hired a program completer, and a graduate.

“By going through the program at Ivy Tech, I was able to get a job in my field three weeks before I graduated,” says Louie Fuelling, who graduated from the program in May 2014, in his letter in the submission packet. “The professors I had did not just teach me the basic knowledge or information for the class. They taught me what I needed to know in the real-world working environment. Leaving Ivy Tech, I had confidence that I would be successful in my career.”