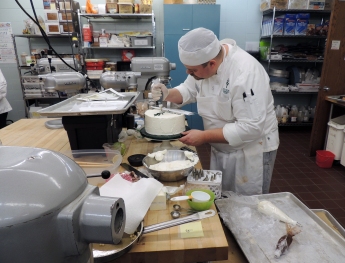 Anthony Flanagan, a baking and pastry student at Ivy Tech Northeast, decorates a cake for the 2015 European Competition. Flanagan was one of eight students selected to travel to France and Spain to study the culinary arts.

Ivy Tech Community College Northeast hosted its 18th annual European Competition (formerly the Mystery Basket Competition) on Friday. Twenty-three hospitality administration students in culinary arts or baking and pastry spent the day competing for a chance to win a scholarship that would pay for a trip to study the culinary arts in France and Spain.

The baking and pastry winners are Anthony Flanagan, Teresa Herczeg, April Luna, and Jamee Thiele. The culinary arts winners are Susan Towsley, Christopher Knowlton, Brian Mongiello, and Madeline Jacquay. They will travel to France and Spain in the spring to study the culinary arts, including lessons in cheese making and charcuterie, visits to vineyards, and classes at European restaurants.

Culinary students received a mystery basket of ingredients on-the-spot to turn into an appetizer, entrée, and dessert. They had four hours to compete their task. Baking and pastry students had 4 ½ hours to fill a decorated cake order, create a fruit plate, make a chocolate dessert, and bake six dinner rolls.

Kitchen judges watched and rated students as they worked, paying attention to technique and ability. Floor judges tasted the completed meals, not knowing which student made which plate.

“What I looked for mostly is, can they break down a fish? Are their knife cuts consistent?” said Glenda Hinton, a kitchen judge who graduated from the hospitality administration program last year and was a winner of 2014’s European Competition. “I knew what to look for because I had been on the other side of it. I knew the things that I missed.”

April Luna, a 2015 baking and pastry winner, said she’d been preparing for the competition since the beginning of the fall 2014 semester.

“There was so much great stuff presented here today,” she says. “I’m in shock that I was chosen.” 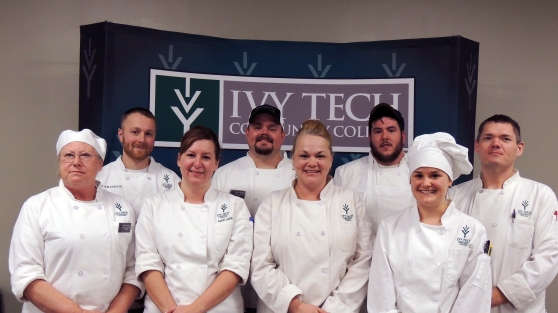