Jonathon Mossburg wears glasses. He wears cargo shorts, sandals, and a T-shirt. His hair’s a little messy. To any eye, he appears to be exactly what he is: A new college graduate a few days after spring commencement: no more classes, no more books.

But Mossburg is one of those “more than meets the eye” fellows: He has cerebral palsy, a movement disorder that affects muscle tone, most often caused by something that happens in utero to a developing brain. When he was born, he says, he had no oxygen. Doctors told his parents, “Your son may never walk or talk.”

He walks and talks, with only a slight stutter.

He received psychological testing, and doctors told his parents, “College isn’t a good route for your son.”

On May 11, 2018, Mossburg got his associate degree from Ivy Tech Community College’s Fort Wayne Campus in Healthcare Specialist. 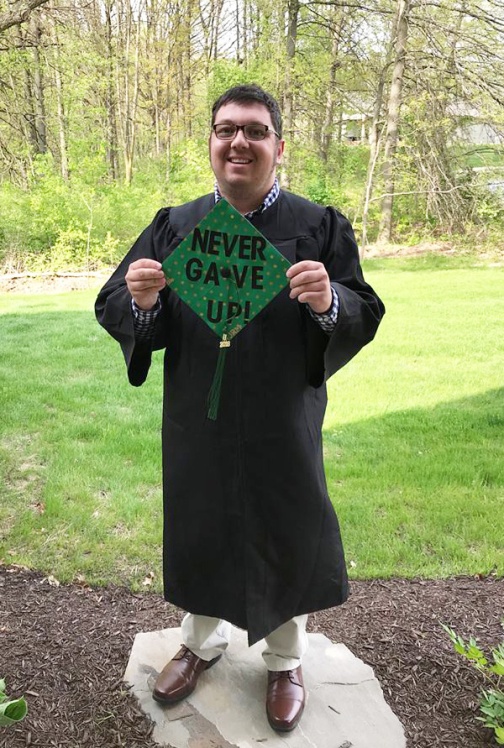 “My dad thought I could do it,” Mossburg says. “He was one of those people that education was (important). He got his master’s degree. He was a smart guy.”

Mossburg agreed with his dad, and he has spent seven years proving him right.

“I always thought I could do it,” he says. “I kind of wanted to do it in his honor too, even though it was for me.”

“He helped me with high school homework and some of my college homework,” Mossburg says. “He was one of the few who said, ‘You can do anything.’”

Mossburg delivers patient trays at Parkview Regional Medical Center. Last summer at work, he heard about a program at Ivy Tech called Achieve Your Degree, a partnership between Ivy Tech and community businesses where the employer covers its employees’ tuition costs. So long as Mossburg kept his grades at a C or higher, Parkview covered his tuition.

Mossburg is the college’s first graduate from the program, which started at Ivy Tech Fort Wayne last summer. Currently, students from 14 different companies are enrolled at Ivy Tech as part of Achieve Your Degree, including 80/20 Inc., Warner Electric, Lutheran Life Villages, and Lake City Bank.

“It makes it easier for people who work full-time to come to school without having to worry about the financial barriers they would normally be worrying about,” says Jennifer Krupa, who coordinates the Achieve Your Degree program.

Plus, it helps with brain drain, when talent leaves a geographic area, because participating companies require that students stay employed with the company.

“What it does is open students up to different opportunities with their same employer that they would not have if they did not possess a degree,” Krupa says.

Mossburg, for example, is looking to transfer to a different department now. He’s eyeballing positions in doctors’ offices, instead of the main hospital where he works, on the administrative or clerical side of things. 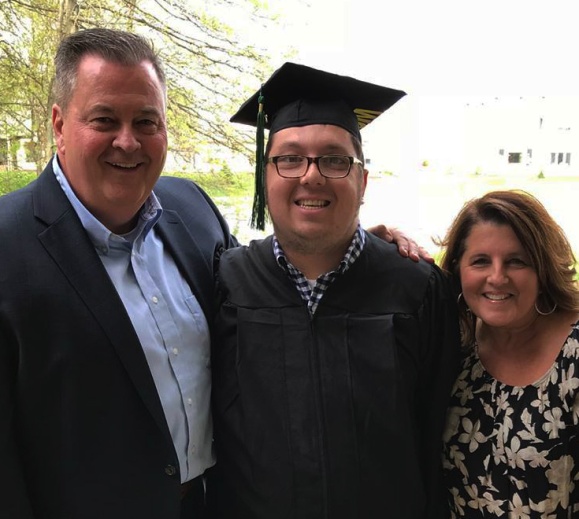 Since graduation, Mossburg has been in pretty regular touch with Ivy Tech’s Career Development office. He’s assuring his resume is in top shape, and he’s looking for advice on moving up, says Joyce Baker, Career Development assistant director.

“When I first met him, he was shy,” she says. “I’ve definitely seen him blossom and become more confident.”

Baker is the one, in fact, who helped Mossburg decide to study Healthcare Specialist. She provided a career assessment test, which showed that Mossburg would excel in medical billing and coding. He wanted to work in healthcare, but his skillset was in the behind-the-scenes end of things instead of direct patient care, which is often all people consider when they think of working in healthcare, Baker says.

In addition to Career Development, Mossburg made use of other Ivy Tech resources like the Center for Academic Excellence tutoring center. His tutor, he says, is encouraging him to return to Ivy Tech for another degree, in Health Information Technology. She tutored him for his advanced coding class and saw how well he did, Mossburg says.

He also worked with Disability Services, which provided, among other things, accommodations for Mossburg to receive extra testing time.

“You just have to look at each individual, at where their strengths and weaknesses lie” to determine the necessary accommodations, says Todd Nichols, director of Disability Services.

Nichols has worked with Mossburg since April 2011.

“He has a lot of grit, and he perseveres,” Nichols says. “It’s not just enough to say he works hard: He looks at how he’s working and makes adjustments as he needs to. He really knows how to hang in there.”

Mossburg has a photo of and quote by Stuart Scott on his Facebook header. Scott was an ESPN sportscaster who died in 2015 from cancer. This is the quote:

“You beat cancer by how you live, why you live, and in the manner in which you live.”

For Mossburg, that manner might be best described by Aesop’s “The Tortoise and the Hare” fable, Baker says.

“He’s like the turtle,” Baker says. “He keeps going forward. He doesn’t give up.”