Debbie Pitzer grew up working on cars. Tinkering with gadgets. Taking things apart. Figuring out how they worked, what made them go.

“It’s how I got interested in technology,” she says.

Pitzer is the program chair for Ivy Tech Community College Northeast’s Machine Tool Technology program, but her bachelor’s degree is in mechanical engineering. 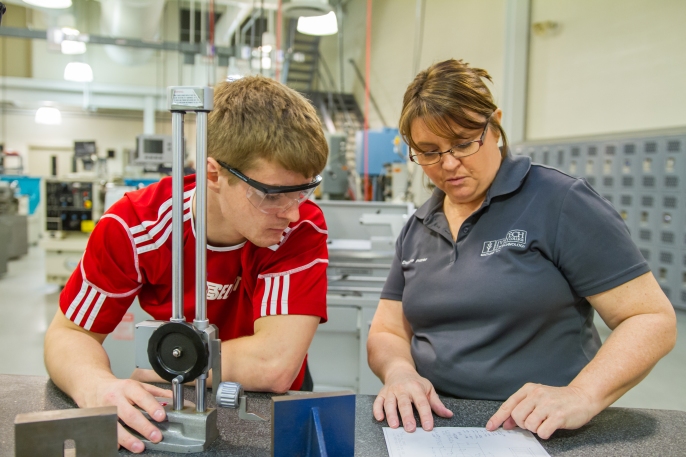 Debbie Pitzer works with Michael Capps, an industrial technology student, in her Introduction to Machining class. Pitzer is the program chair for Machine Tool Technology at Ivy Tech Northeast. Throughout the United States, less than 30 percent of the science and engineering workforce are women.

These numbers mirror a national stat—women make up half of the total college-educated workforce in the United States but just 29 percent of the science and engineering workforce, according to the National Girls Collaborative Project, a charitable group committed to encouraging girls to pursue STEM careers. Pitzer saw similar numbers when she was a student, too. 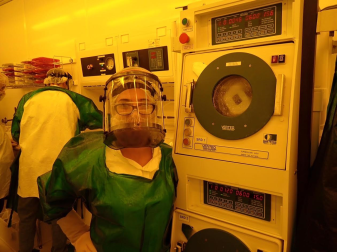 This spring, Olivia Koehler became the first woman to graduate from Ivy Tech Northeast’s Electrical Engineering Technology program. Koehler traveled to the University of New Mexico last year, where she gained experience working in a clean room, a space free from dust and contaminants that is often used for manufacturing electronic components.

“I was either the only (woman), or there was one other,” she says.

Olivia Koehler graduated this May from the College’s Electrical Engineering Technology program; she is the first woman to do so. Koehler says she had just one or two classes with another woman, a fact she originally found intimidating.

Koehler, who was homeschooled, didn’t know what she wanted to study in college. Her father pushed his field, electrical engineering, because she excelled in science, but Koehler was dubious.

So he took his daughter to work. Koehler’s father taught electrical engineering classes, and he invited her to sit in on a class.

“They were going over circuits, and I loved going through the creation process of the circuit, all the intricate details. I wanted to learn more about that,” she says.

Chris Barlow encourages women to get into STEM fields, too. Barlow, who teaches biology at Ivy Tech Northeast, encourages her female students to stick with the field. And her daughters. And the girls she works with while volunteering to help a local school’s students on their science fair projects.

“There are fundamental differences in the way males and females look at the same problem,” Barlow says. “(Women) may see it differently, may see different patterns, and (those differing viewpoints) makes science more robust.”

Chris Barlow, who teaches biology at Ivy Tech Northeast, says girls start to shy away from STEM subjects as early as fifth or sixth grade. Before then, girls are just as excited about science and math as boys.

Through her work volunteering, Barlow has noticed that girls in kindergarten to fifth grade often love science. She calls them “confident explorers, ready to discover.”

Globally, girls tend to outperform boys in science—except in Great Britain, Canada, and the United States, according to the Organization for Economic Cooperation and Development, whose mission is to improve the social and economic well-being of people around the world. Barlow thinks, at least in the United States, that discrepancy begins to occur in the sixth grade, the time when she sees girls’ confidence plummet.

“Something in our society is setting these girls up in middle school to think they’re not good at science or math,” she says.
She saw it in her two daughters, too, girls she raised to know they can do anything, to never question whether a topic of study was beyond their reach just because of their gender.

Then middle school hit, and her daughters said something they’d never before said: “I can’t do this. I’m not good at math.”

“Where did you get that?” Barlow asked.

Their friends said it.

“It’s this social awareness that blossomed when they were in middle school,” she says. “They were mimicking things they heard other girls say.”

A good job market for women

Though Koehler just graduated in May, she has already worked at Fort Wayne Metals, a medical-grade wire and cable producer, for two years.

Though just a small number of women study machine tool technology—Pitzer estimates that her classes are 98 percent men—they always find work after completing the program.

“Women are really good at it,” she says. “Every female we had who graduated gets a job, and she gets a job right away. I encourage them to go into the field because I know they are highly sought after.”

Women tend to be more detail-oriented, Pitzer says. It’s not that they’re better at the work than men, but they are often more focused on producing quality parts.

She wonders if it’s that focus on quality that stymies women from entering her field: In her experience, Pitzer says, she has seen women get discouraged when they are unable to perfect a task. And if the result isn’t perfect, they’re more likely to move to a different discipline. Men, meanwhile, will stick with it, even if they’re not perfect, she says.

Studies have proven Pitzer’s hypothesis: The book The Confidence Code shares findings that show when a professional endeavor goes wrong, women are more likely to blame themselves; when something goes right, they’re more likely to credit others for the success, reported Time magazine.