“If you pick the right people and give them the opportunity to spread their wings (…) you almost don’t have to manage them.”

Jack Welch, the 20-year General Electric CEO who grew the company’s value by 4,000 percent, said those words. His tactic—letting talented people do their thing—is one the owners at Joseph Decuis seem to take to heart: They hired a new head chef late last year, and one of his first orders of business? Reorganize the kitchen completely and change the menu.

“We’ve got a good reputation, and I plan on keeping that reputation, but I want to make it better,” says Marcus Daniel, the Roanoke restaurant’s head chef and a 2006 graduate of Ivy Tech Community College Northeast’s Hospitality Administration program. “The owners put a lot of trust in me to make the best food I can.”

Marcus Daniel, the head chef at Joseph Decuis in Roanoke, is a graduate of Ivy Tech Northeast’s Hospitality Administration program. “It was a really good program to be in,” he says. “School taught me the basic foundation of cooking.”

His new menu, which changes regularly, focuses on fresh, farm-to-fork options. His goal is to see most of his menu—80 percent—come from the Eshelman farm; Pete and Alice Eshelman, who own Joseph Decuis, also run their own farm, which produces myriad produce and protein options: chickens, pigs, goats, sheep, and turkeys. According to the restaurant’s website, it is the only farm in the country to raise Wagyu beef, known for being the best tasting, healthiest beef in the world, following traditional Japanese husbandry practices. 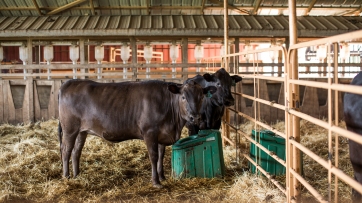 Joseph Decuis is known throughout the region for its Wagyu beef, often considered the best tasting, healthiest beef in the world. The Joseph Decuis farm is the only one in America to raise Wagyu beef, according to the restaurant’s website.

“I haven’t ordered eggs in two months,” says Daniel, who rattles off some of his kitchen’s from-scratch offerings: pita bread, lemon rosemary biscotti, rhubarb sorbet, Mangalitza hash, a recipe he based on a dish from Los Angeles.

Daniel has worked in kitchens from California to New York, including the John Dory Oyster Bar, a New York City restaurant under April Bloomfield, a British chef known for holding a Michelin star, a mark of distinction to recognize quality of cooking, at two restaurants.

“I couldn’t find anything I wanted to do,” he says, so he turned to Ivy Tech Northeast for cooking. “It was either that or barber school.”

“You were gonna be a barber?” Daniel asks.

It might seem hard to fathom: Richardson is Daniel’s sous chef, charged with serving as a liaison between the business and cooking sides of the restaurant. Richardson started at Joseph Decuis two months before Daniel, and when the restaurant needed a head chef, Richardson knew where to look.

“We complement each other really well,” Daniel says. “Nick is very organized and very structured.”

One of Daniel’s goals with Joseph Decuis is to focus on small-plate options.

“When I go out to eat,” he says, “I’d rather eat the whole menu. “I want to appeal to a younger demographic, who grew up with the Food Network, who knows about the rest of the world but maybe hasn’t had a chance to explore it.”