Right now, 11 students or recent graduates are traveling around Washington D.C. with three chaperones on a social justice trip. They are making stops to spots like the U.S. Holocaust Memorial Museum, the Martin Luther King Jr. Memorial, and other spots related to social justice. During their trip, students are taking turns sharing their thoughts with Green Light.

First up: Emerald Bentley, who graduated with her associate degree in nursing on Friday (CONGRATS, EMMY!) Follow along with the group’s experiences on social media with #ivyFW2DC.

I have been an active student since beginning at Ivy Tech Northeast, but during the last year of my degree, I haven’t been able to participate as much. My husband recently enrolled in classes at Ivy Tech, and when I saw the Washington D.C. trip, I thought it would be a great way for us both to get involved.

I was raised a middle class, white chick from rural Indiana. I moved to Fort Wayne as a freshman in high school. At my first high school, there would have been 27 in my graduating class; in Fort Wayne, there were 525. I had major culture shock!

I’ve always believed I am a good person. I try to do right by others, but I want to be able to have the hard conversations. I want to be able to ask questions without causing offense. This trip helps with this, highlighting different people with different experiences and different stories. I truly believe we are more similar than we are different.

Yesterday was our first full day in the D.C. And boy were we busy!

We jumped on public transport (something none of use are super familiar with) and headed to the Capital. We met one of our senators, Joe Donnelly. We had coffee with him and his staff. They answered our questions and gave us some great recommendations of things to do and see in D.C. After coffee, we went on a tour of Congress. We got to see both the House and Senate while in session, and we saw Donnelly speak.

Then it was off to the Supreme Court. Of everything on the agenda, this was one of the buildings I was most excited to see: This building houses all the major court decisions for the last 100-ish years. Court was in session, so we were not able to tour the chambers, but being there was so awesome!

The Supreme Court of the United States

After the Supreme Court we headed over to Ford’s Theatre. It was eerie being in the same place that President Lincoln was shot–seriously, just a few seats away! We saw the play “Ragtime,” which is from the perspective of three groups of people in the early 1900s. The language was rough: They used words we consider unacceptable. 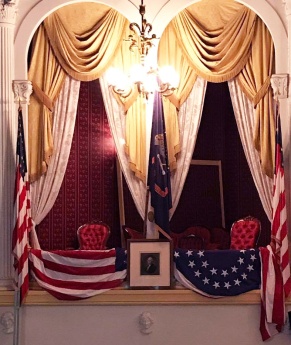 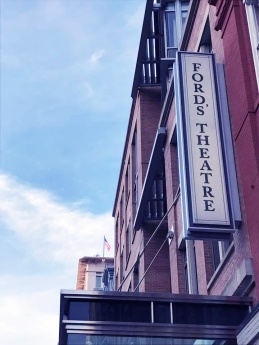 We watched the play “Rag Time” at Ford’s Theater, where President Lincoln was assinated.

Click on the image to zoom and for caption info.

Over all yesterday, I marked several things off my bucket list.  Washington D.C. is a must-visit for any American.  This is our city, and the people here work for us. I think we sometimes forget that.