The frames are classic wayfarer, the most popular selling sunglasses in history, and made of cherry wood from a New York-state tree farm. The wood is coated to withstand the elements, not unlike a deck, and it should age, like a fine leather bag, so that, 10, 15, 20 years down the line, the glasses are unlike any other pair out there.

Jamal Robinson, an Ivy Tech Northeast alum, won the 2016 New Venture Competition with his business, DESIAR Eyewear. With his winnings, he plans to launch the Hoosier line of glasses, made with cherry wood.

Jamal Robinson is the brains behind these wooden glasses, which are manufactured entirely in Indiana. He is able to launch the line—the Hoosier line—with the funds he won last month at Ivy Tech Community College Northeast’s New Venture Competition. In its sixth year, the competition awards start-up capital to a new or beginning business. Robinson won $35,000 toward the line, part of his company, DESIAR Eyewear.

“When it comes to DESIAR, I know DESIAR,” said Robinson, an Ivy Tech Northeast alumnus who graduated from IPFW with an associate degree in business. “With all that, I felt comfortably prepared. I was confident I did the best I could do.”

Robinson was one of three finalists for this year’s competition, along with Andrew Smittie of Green E-Waste Miracles, a company that collects and recycles waste the garbage company won’t pick up; and Guadalupe Callejas of Metro Striping & More, an interior and exterior painting company. 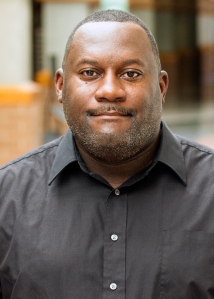 All three finalists are minority men, notable in part because of how difficult it can be for minority business owners to get funding, says Clifford Clarke, an advisor for the College’s African American Male Initiative and a member of Fort Wayne’s Black Chamber of Commerce.

According to the U.S. Department of Commerce, the national percentage of minority-owned firms is on the rise, from 22 percent to 29 percent between 2007 and 2012. While the numbers may be growing, however, it is still difficult for minority entrepreneurs to secure funds and resources.

“I remember sitting in a conference, and a minority entrepreneur was explaining how hard it was for him to get money,” Clarke says. “I think that the population as a whole is truly underserved.

“It continually promotes the perception that the African American or minority population is always looking for the proverbial handout. That’s not the case. We’re trying to reach the same level of parity as our non-minority counterparts.”

It can also be difficult for minority business owners to receive exposure and mentorship, he says, two more keys in determining the success of a small business.

This was the fifth year John Dortch, former Black Chamber of Commerce CEO and a local entrepreneur, has judged, he says. One of the things that keeps him coming back is the continuing variety of finalists.

“It’s been great to see the diversity,” says Dortch, president and CEO of The Preston Joan Group. “(This year), they all are very, very tough to judge. They all have a quality product. The presentations are very good. I think they’re going to do very, very well with what they’re doing.”