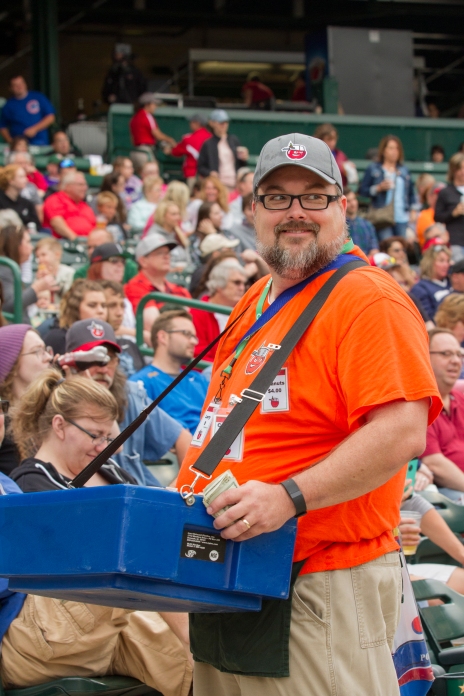 Bases are loaded for faculty member who leads a spirited life

Standing at the bottom of the aisle that divides Sections 104 and 105 at Parkview Field, Larry Davis Jr. looks up to make eye contact with Fort Wayne TinCaps fans on a warm but overcast June 16 evening.

“How’s everyone doing tonight?” he asks. The spectators respond with a jubilant, “Good!”

Each summer, Davis designs, autographs, and distributes his own Larry the Vendor Guy baseball card, highlighting statistics and fun facts about his alter ego.

Davis turns to his left. “I want everyone over here to say, ‘Pea.’”

Davis turns to his right. “I want everyone over here to say, ‘Nuts.’”

Following Davis’ alternating gazes and hand gestures, both sections chant the word assigned to them, forming a chorus of “peanuts” nearly half a dozen times until Davis, the man in the orange vendor T-shirt, interrupts them in a loud, low-pitched growl, “And beer.”

For TinCaps loyalists, watching Davis engage with the crowd as his alter ego, Larry the Vendor Guy, is a sight as entertaining as rooting for the home team. And sharing the limelight with the TinCaps is no small feat at Parkview Field—a stadium that has won consecutive honors in 2015 and 2014 as the No. 1 Overall Minor League Ballpark Experience by Stadium Journey, a travel magazine for sports buffs.

Despite his resemblance in physical stature and humorous presence to Larry the Cable Guy, Larry the Vendor Guy is not a blood relative of the Blue Collar Comedy Tour comedian. While the two share a similar name, Davis concedes that Larry the Cable Guy is funnier, but that he is louder.

Larry the Vendor Guy made his debut the very first night Davis hawked his first can of Miller Lite and box of Cracker Jack four years ago.

“At the ballpark, I did some yelling. It seemed to make the crowd laugh, so I continued,” Davis says. “In the seventh inning I was headed up the steps and took a foul ball to the back. It hit my built-in padding, but it stung a bit. I turned around and gave the batter the business in a fun way and the crowd loved it. Thus started the craziness at the ballpark.”

Within days of introducing his new persona and sharing the news at work, one of Davis’ best friends and co-workers encouraged him to bring Larry the Vendor Guy into the age of merchandising and social media. In response, Davis now promotes his likeness through five social media channels and annually designs a Larry the Vendor Guy baseball card that he autographs and distributes at games—all of which has led to a substantial fanbase.

One detail involving Davis and the camaraderie between players and fans at Parkview Field is undeniable: Davis loves his TinCaps family, and it loves him.

“I can point to a time when the team was losing late in the game, and he worked the entire stadium into a frenzy of support. I honestly believe it rattled the other team.” 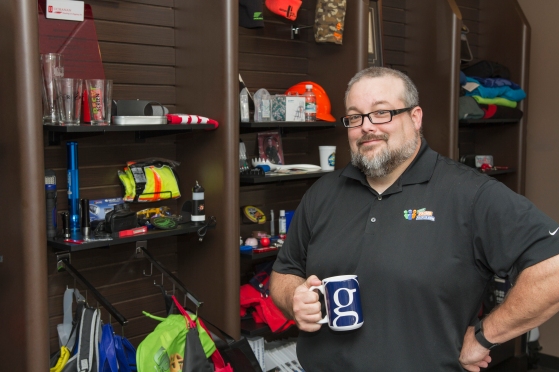 Trademark Larry-isms aren’t just confined to Parkview Field; glimpses of his creativity and out-of-the-box thinking can be found at YourPromoPeople.com,  a division of JH Specialty Inc., where he serves as the lead graphic designer and photographer for the local business that specializes in customizable promotional items.

“He is highly valued here and brings a team attitude,” says Troy Lewis, director of online sales and Davis’ supervisor. “When one individual is down, he is there to pat the person on the back and remind him that one inning doesn’t make a ball game.”

Davis’ primary contribution on the job involves developing promotional swag for a number of high-profile clients, such as country music royalty the likes of Tim McGraw, Keith Urban, Garth Brooks, and Trisha Yearwood, as well as TV programs,  which include the History Channel’s American Pickers and Discovery Channel’s Shark Week specials.

“It amazes me when something I create ends up on the national stage and is bigger than life,” Davis says. “This is truly the best place where I’ve had the good fortune to work.”

Davis teaches one visual communications class each spring and fall semester. “My position is that I don’t treat the students any different than what they will get in the real world with their clients,” he says. “I grade each student against his or her own abilities and potential.”

Davis is a member of Ivy Tech Northeast’s Visual Communications Advisory Board, and program chair Erin Salyers approached him two years ago about becoming an adjunct faculty member—an invitation he accepted. He’s now teaching one class each fall and spring semester.

“Since Larry is involved in so many different local organizations, he is able to network with professionals and offer his students real-world design projects throughout the community,” Salyers says.

Indeed, when Davis isn’t at work, his spare time reflects a colorful tapestry of community involvement, from serving as an officer with the Scottish Rite and vice president of the American Advertising Federation of Fort Wayne to service with the German Heritage Society and volunteering with Big Brothers Big Sisters of Northeast Indiana.

Toward influencing the future of the graphic design field, Davis says he enjoys mentoring students and assigning
them mock projects inspired by his professional contacts.

“Everyone has different learning abilities and strengths, but everyone can learn new ways of doing things,” Davis says. “It’s an amazing thing to watch a caterpillar turn into a butterfly.”

And if there’s one person who knows about making a successful transformation into someone new, it’s Davis.

Connect with Larry the Vendor Guy via social media