Were you by chance one of those kids who had to try really hard to keep her hands to herself in museums? Because you wanted to reach out and feel the texture of the paint or run your fingertip over a statue’s eyeball?

Then, seriously, you have got to check out Text Messages this semester. 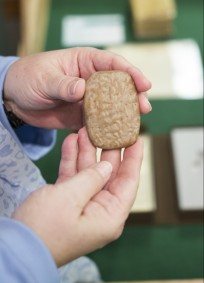 Text Messages is an exhibit of 50 first- and early-edition books and manuscripts. And you get to touch them. Pick them up. Page through them and wish you were able to read them all (it’s not just the Latin ones that are tough to read–some of those in ye olde English are just as foreign).

The oldest one isn’t even on paper–it’s on a Sumerian terracotta tablet from 2200 B.C., and it’s the size of your palm (at right). There’s another, a portion of the Torah, the Jewish holy book, on deer skin. There are books that were handwritten and others that were printed with a moveable type so old, the S’s look like a lowercase F. It’s called a long S, and The Straight Dope gives a succinct description of what the heck it was for:

” … (T)he long/medial s was supposed to be used in the middle of a word, while the terminal s was used to finish one off. (In practice this rule was somewhat haphazardly adhered to.) The two versions were phonetically equivalent and derived from the same Roman letterform. Why folks figured they needed two varieties when they could have scraped by with one is beyond me, but we might note that having terminal and middle letterforms is not inherently any nuttier than having every sentence start with a capital letter, a comparatively recent invention.” 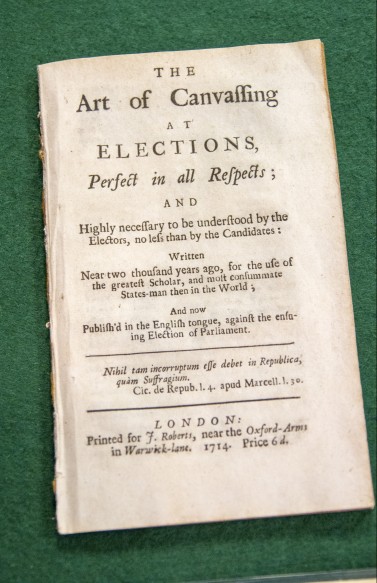 The exhibit, which celebrates Indiana’s bicentennial (happy 200th, you son of a gun), officially opens Tuesday in Café Verde on the Coliseum Campus, so when you get back from your three-day weekend, be sure to stop by.

Click on the photos below for caption information and to view the images larger, in a slideshow.

Look at the beautiful edging on Immanuel Kant’s “Critick of Pure Reason.” 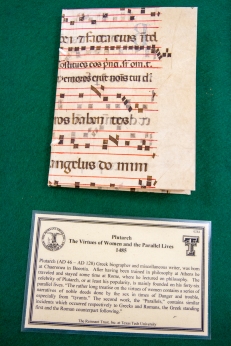 The cover to Plutarch’s “The Virtues of Women and the Parallel Lives” appears to be hand-written. This Egyptian scroll fragment, Covenant with Abraham from Genesis, was printed on deer skin. 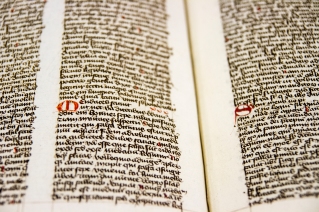