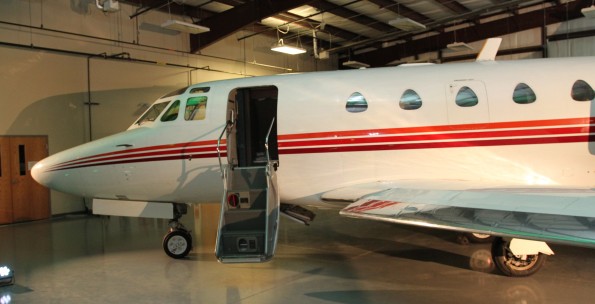 As Ivy Tech Community College Northeast extends gratitude to the numerous benefactors, community leaders, and elected officials whose combined efforts helped secure a retired corporate jet for its Aviation Maintenance Technology program,  the College would be remiss not to include Google.

With minimal notice, Meske flew to Fort Wayne from the company’s headquarters in Perryville, Mo., to partake.

“It’s great to see how much Ivy Tech is putting into the next generation of aviation mechanics and engineers since many people in the industry are retiring,” Meske says.

Sabreliner Aviation is the modern-day iteration of North American Aviation, an iconic manufacturer of midsized commercial and military jets dating back to the late 1950s. The Sabreliner series is named for its similarity to the wings and tail of North American’s F-86 Sabre jet fighter.

Beginning this summer, aviation maintenance technology majors will benefit from training on the Sabreliner, which exceeds industry standards and requirements; similar programs rely solely on mock-up equipment and textbooks for training.

Nearly 100 guests watched as a number of benefactors, community leaders, and elected officials who made the donation possible earned their Ivy Tech “wings”— a gold “IVY”-inscribed lapel pin to mark the occasion. Photos by Dane Hawley and Zeke Bryant

Guests were encouraged to tour the Sabreliner after the ceremony.

“We could not be more thankful for our generous donors and the widespread community support,” says Oliver Barie, executive director of resource development. “The Sabreliner will change the lives of our students and help create a better Indiana, which is exactly what we aim to do as a college.”

This new gift is now not only the largest aircraft in the program’s fleet, but it is also one that represents an “open skies” frontier on many levels.

“The Sabreliner has complex systems comparable to an airliner. Airliners are a major part of the aviation community, and they provide a wider range of job opportunities, from being an aircraft mechanic to being an aircraft systems engineer,” says Satya Sunkavalli, a 2015 aviation maintenance technology graduate who was selected to be a student speaker at the event.

Aviation Maintenance Technology Chair Michael Clouse says another benefit with the donation will be Ivy Tech Northeast’s ability to develop a new program concentration in avionics—the detailed study of electronic systems on aircraft.

The proposed concentration would be an option that adds another semester of course work and training following the completion of an associate degree and passing select Federal Aviation Administration tests.

“Many newly licensed airframe and powerplant graduates are seeking specialized training in avionics to enhance their employment opportunities,” Clouse says. “The complexity of the systems on the Sabreliner provides us with some of the necessary equipment to develop this new concentration and offer advanced training,” Clouse says.

The program currently has more than 90 students enrolled, with about 20 of them being high school students from Fort Wayne Community Schools’ Career Academy at Anthis.