I first learned of teds market at a pop-up shop on West Wayne Street this spring. The market’s owner and kitchen manager were telling patrons about the neighborhood market, passing out free samples. I became a believer because of that bread–chunks of nuts and fruit made a slice better than any detailed appetizer.

Who: Glenda Hinton, teds kitchen manager and executive chef, graduated from Ivy Tech Northeast’s Hospitality Administration program in spring 2015 with a concentration in both baking and pastry arts and culinary arts. She wanted both specialties so she could run a kitchen and a bakery–perfect for a set-up like teds. 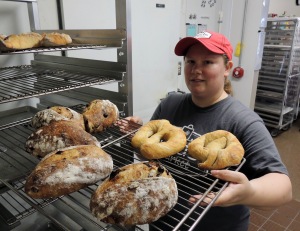 Hinton with loaves of bread and some sourdough bread pretzel tests.

What: The market offers a bakery and deli with prepared salads and a made-to-order sandwich station and salad bar. The meat counter will feature full loins, cut-to-order. The bakery has treats including brownies, cookies, and the aforementioned Fabulous Bread (my title, not theirs). The wine bar downstairs is scheduled to open two to three weeks after the market’s grand opening (which is 10 a.m. TODAY, July 17).

How: Hinton was looking for a job and saw a teds market posting on campus. Hinton’s former hospitality administration professor, Cheryl Hitzemann, advised Hinton to apply. She had taught Brian Hench, the market’s owner, and told Hinton she’d enjoy working for him.

About that building …: It used to be a church. Hench contacted the former pastor to see about getting some land the church wasn’t using. The pastor offered one better: the entire church. Hench and his crew, including Hinton, remodeled the building, including adding wood floors. Hinton used some of the extra wood to make tables for deli patrons. There’s also a house out back, a tree house, and a grave yard. I smell a Halloween party three months from now. 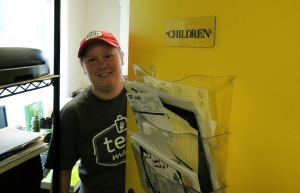 Hinton’s office used to belong to a children’s minister. She opted to keep the sign. The back of the door is a purpley magenta.

So that’s “teds market,” not “Ted’s Market”?: That’s right. Hench wants the market to be a casual, friendly, neighborly place, and he wanted to extend that casual feel to his market’s moniker, Hinton says.

All about Ivy Tech: Hinton is not the only teds employee with a connection to the College: Sarah Fox and Leola Renfrow are baking and pastry grads; Tyler Hogston has his culinary degree and is supplementing with some agriculture classes; Justin Rhodes is a new hospitality student; DeEndre Robinson needs one class to graduate and will work on her internship at teds with Hinton; Colin O’Day is about halfway through his degree.