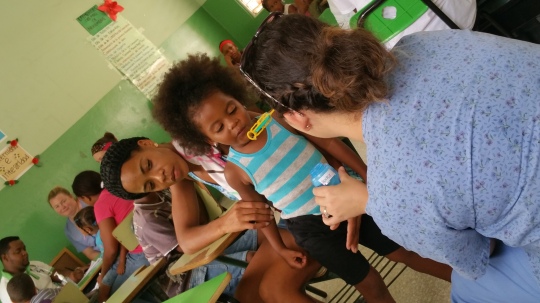 Ivy Tech Northeast nursing student Cordelia Turpchinoff applies her child development skills to entertain a young girl as she and her mother await their turn to be seen by a doctor in San Janoa de Azua.

It’s a premise that sounds like the opening line to an improbable joke, but for two Ivy Tech Community College Northeast clinical instructors and a group of nursing students, the scenario was quite real last November.

The brief interaction between the livestock and the College representatives was one of several cultural observations made by the visitors during their one-week commitment to staff rural community health clinics in the Dominican Republic—Ivy Tech Northeast’s first initiative involving healthcare delivery on an international scale.

“One day we came back to the clinic and saw these two sheep hangin’ out,” recalls Maria Hines, assistant professor of nursing. “We were surprised by them, but they looked as though they were at home.”

Indeed, the sheep were at home, as Hines, Assistant Professor of Nursing Denise Kneubuhler, and the nursing students soon learned.

Local residents explained that the sheep, which were cared for like pets, played an important role in diagnosing ailments among the area’s human inhabitants. Bloodletting was occasionally performed on the sheep, and their blood was used as a growth medium on agar plates, essentially petri dishes, for the purpose of identifying and treating infections.

“I think this type of clinical exposure is really good for students, especially nursing students, because it helps them see their place in the world,” Hines says. “Healthcare isn’t the same in every country.”

Inspiration for the direct-care trip came from Kneubuhler, who served as a medical missionary for seven years in Kenya and wanted to establish a cross-cultural learning objective for the College’s nursing students.

“Going to Africa was cost-prohibitive, and you’d need at least two weeks,” Kneubuhler says. “That would not work with the curriculum.”

As a compromise, Kneubuhler visited a lead in the Dominican Republic as early as 2012, but the potential host lacked sufficient resources. The following year, she began communicating with Solid Rock International, a faith-based missionary headquartered in Indianapolis. Solid Rock works with American colleges and universities and coordinates meals, lodging, and transportation for volunteers.

Kneubuhler and Hines began fielding student interest in the trip last March and launched informational and orientation sessions soon afterward. Participation required self-financing, a minimum GPA, an application, a cultural essay, and fall semester enrollment in either of the Nursing program’s medical–surgical or pediatrics–obstetrics courses, which were taught by Hines and Kneubuhler, respectively. In return, each nursing student would earn 36 clinical hours of the 192 required for either course.

Nursing student Elizabeth Castillo knew exactly what the opportunity would entail given her numerous visits to similarly impoverished Guatemala, where she has visited her mother’s family since childhood.

“I went into nursing knowing exactly what I wanted to do,” Castillo says. “I want to be able to provide care and serve people worldwide, especially in places that are the most in need.”

Ivy Tech Northeast nursing student Cordelia Turpchinoff applies her child development skills to entertain a young girl as she and her mother await their turn to be seen by a doctor in San Janoa de Azua. 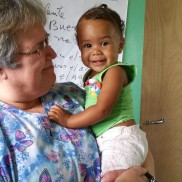 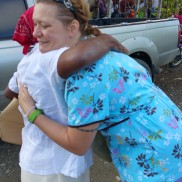 Clockwise from top left: Nursing student Elizabeth Castillo takes a Dominican woman’s blood pressure at the triage station in a medical clinic; A rooftop view from San Juan Bautista Cathedral in San Juan de la Maguana. The cathedral is an eclectic blend of Arabic, Baroque, Gothic, and Roman architectural stylings, and it borders a plaza that honors Francisco del Rosario Sanchez, a politician and founding father of the Dominican Republic; Assistant Professor of Nursing Maria Hines speaks with school girls outside of their school, the Christian Center for Educational Development in San Juan; Nursing student Jaime Vinson receives a hug from a Dominican woman outside of a community center where a medical clinic was established for the day;Ivy Tech Northeast Assistant Professor of Nursing Denise Kneubuhler cradles a toddler during her staffing responsibilities in a makeshift medical clinic.

Altogether, 19 nursing students—17 females and two males—and the two clinical instructors flew to Santo Domingo, where they piled onto a bus that hauled their mobile clinic’s supplies in a trailer.

At each makeshift site, from a community center to school classrooms, the nursing students were supervised as they coordinated triage, maintained crowd control, assisted the doctors, and packaged all medications. Hines estimates that about 200 Dominicans were medically evaluated each day.

As the patients awaited consultation, the nursing students led a series of nine public health education sessions, from parasite control and diets for diabetics to self-breast exams and prostate health. Solid Rock selected the topics based on the greatest informational needs. Educational materials for the sessions were translated into Spanish by Ivy Tech Northeast Spanish 101 and 102 students prior to the trip.

Nursing student Jaime Vinson says she values the lessons she expected to learn and those that surprised her.

“I expected to take away a better understanding of the medical field in less fortunate countries, but what I didn’t expect to gain was a closeness to my peers and a sense of teamwork,” Vinson says. “And the smiles of Dominican people are so very pure. They know a joy we will never know.”

Kneubuhler says the Dominicans were appreciative of the medical care they received.

“They came up and gave us hugs and kisses, saying ‘Gracias, gracias.’” Kneubuhler says. “And they honored us by making food from their limited supplies.”

Solid Rock officials have already asked Hines and Kneubuhler for a repeat visit this year, telling Kneubuhler the ministry has never seen such a cohesive group that worked so well together.

“Several of the students commented that this experience helped them put more pieces of the puzzle together in terms of what to assess with a patient and how to respond,” Kneubuhler says. “I think they felt more like nurses than just students.”