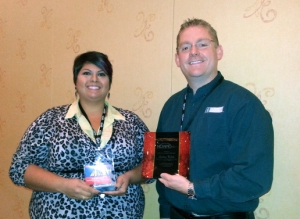 In addition to the college’s awards, listed in full below, assistant director Aja Michael was named the region’s Rising Star, an award new this year that recognizes an up-and-coming communications professional at a two-year community or technical college who shows evidence of a promising future; exectuive director Andrew Welch was named Communicator of the Year, which recognizes a two-year college marketing, public relations, or communications professional who has demonstrated leadership in college communications and marketing.

“We have a small—but mighty—team of creative individuals that works toward a common goal each day,” Welch said. “The dedication and mind power of our marketing and communications staff creates a space where it’s easy to come to work, and you know what you’re doing is making a difference in people’s lives.”

The five-person staff won medallions in the following areas: